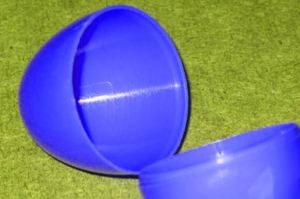 Philip wasn’t like the other children at church.  Though he was a pleasant, happy boy, he struggled with things that came easily to other kids.  He looked different, too, and everyone knew it was because he had Down’s Syndrome.  His Sunday school teacher worked hard to get the third-grade class to play together, but Philip’s disability made it difficult for him to fit in.  Easter was just around the corner, and the teacher had a wonderful idea for the class.  He gathered some plastic eggs that pantyhose used to come in and gave one to each child.  Then, together, they went outside into the beautiful day.  “I want each of you to find something that reminds you of Easter—of new life,” the teacher explained.  “Put it in the egg, and when we get inside, we’ll share what we found.”  The search was glorious.  I was confusing.  It was wild. The boys and girls ran all over the church grounds gathering their symbols and finally, breathlessly, the eight-year-olds were ready to return inside.  They put their eggs on the table watching.  He opened one, and there was a flower.  Everyone oohed and aahd.  He opened another, and there was a butterfly.  “Beautiful,” the girls all said.  He opened another and out fell a rock.  The kids laughed.  “A rock?”  But the boy who found it said, “I knew you would all get flowers and leaves and stuff.  So, I got a rock cause I wanted to be different.  That’s new life to me.”  The kids laughed again.  But when the teacher opened the next egg, the group fell silent.  “There’s nothing there!” said one child.  “That’s stupid,” said another.  “Somebody didn’t do it right.”  Just then the teacher felt a tug on his shirt and turned to see Philip standing beside him.  “It’s mine,” Philip said.  “It’s mine.  The children said.  “You don’t ever do things right, Philip.  There’s nothing there!”  “I did so,” Philip said.  “I did do it right.  It’s empty.  The tomb is empty.”  There was another silence.  A very deep, unlike-eight-year-olds kind of silence.  And, at that moment, a miracle happened.  Philip became a part of that third-grade Sunday school class.  They took him in.  He was set free from the tomb of his differentness.  From then on, Philip was their friend.  Three months later, Philip died.  His family had known since the time he was born, that he wouldn’t live out a full life span.  An infection that most children would have quickly shrugged off took the life out of his body.  The day of the funeral, the church was filled with people mourning Philip’ death.  But it was the sight of nine third graders walking down the aisle with their Sunday school teacher that brought tears to most eyes.  The children didn’t bring flowers.  Instead, they marched right up the altar, and placed on it an empty egg—an empty, old, discarded panty hose egg.