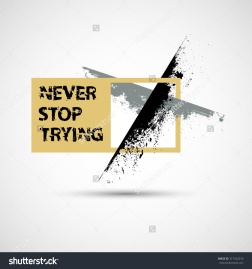 Don’t be afraid or discouraged because I am with you. (Isaiah 41:13)

As a former teacher, I can’t begin to tell you how much I hated the phrase, “I can’t do it.”  And it seemed the older we got, the easier it became to say it.

When we were born, we immediately began to learn new things.  Whether it was learning to eat on our own, learning to talk, learning to walk, or learning to dress ourselves, everything was brand new to us.  And no matter how silly we looked or how funny we sounded while making those first attempts, we kept on trying until we got it right.  When we learned to talk, we began another learning experience; asking questions.  We asked anything and everything.  We never asked ourselves if what we were asking was silly.  We just kept asking-endlessly.

We were also never afraid to try new things either.  I remember eating bugs to see if they tasted good.  Jumping out of our second-story window into a pile of snow seemed like a good idea at the time.  Bringing home a pocket full of worms was my gift to my mom.  But somehow as we got older we were less willing to try new things.

The girls’ cross-country team at my alma mater began its first season shortly after I became the assistant running coach.  The team consisted of a couple of upper-class girls and several junior-high girls.  Never having coached girls distance runners before, we weren’t sure of exactly how to coach them.  So we simply trained them with the boys’ team and expected them to keep up.  Since they didn’t know any better, they did a great job of keeping up.  They ended up trashing most of their female counterparts  because they believed that was what they were supposed to do.  They had no fears or doubts about themselves.

The very successful coach of the UConn womens’ basketball team, Geno Auriemma, deals with each year’s new recruits with this admonition, “Don’t tell me you can’t do something.  I’ll tell you when you can’t so something.  The team has won 11 national champions since 1995 and are currently trying to win their twelfth.  Along the way, they have compiled winning streaks of 75, 90 and currently at 108 and counting.

I guess the bottom line is don’t be afraid to ask questions or to try something new.  We should always try to keep learning new things and to experiment with new activities.  Who knows what kind of new success and fulfillment you may find.  You’ll never find out unless you try.

One thought on “Keep on trying.”