I recently came across a short essay by Paul Harvey, conservative American radio broadcaster for the ABC Radio Networks.  He broadcast News and Comment on weekday mornings and mid-days, and at noon on Saturdays, as well as his famous “The Rest of the Story” segments. From the 1950s through the 1990s, Harvey’s programs reached as many as 24 million people a week. Paul Harvey News was carried on 1,200 radio stations, 400 Armed Forces Network stations and 300 newspapers.  Written in 1996, this was an update of a broadcast he had done in 1965. 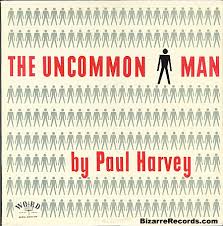 If I were the prince of darkness, I would want to engulf the whole world in darkness. I’d have a third of its real estate and four-fifths of its population, but I would not be happy until I had seized the ripest apple on the tree — thee. So, I would set about however necessary to take over the United States. I’d subvert the churches first, and I would begin with a campaign of whispers.

With the wisdom of a serpent, I would whisper to you as I whispered to Eve: “Do as you please.”

To the young, I would whisper that the Bible is a myth. I would convince the children that man created God instead of the other way around. I’d confide that what’s bad is good and what’s good is square.

And the old, I would teach to pray after me, “Our Father, which are in Washington …”

Then, I’d get organized, I’d educate authors in how to make lurid literature exciting so that anything else would appear dull and uninteresting.

I’d peddle narcotics to whom I could. I’d sell alcohol to ladies and gentlemen of distinction. I’d tranquillize the rest with pills.

And with promises of higher ratings, I’d have mesmerizing media fanning the flames.

If I were the devil, I would encourage schools to refine young intellect but neglect to discipline emotions. I’d tell teachers to let those students run wild. And before you knew it, you’d have drug-sniffing dogs and metal detectors at every schoolhouse door.

With a decade, I’d have prisons overflowing and judges promoting pornography. Soon, I would evict God from the courthouse and the schoolhouse and them from the houses of Congress.

In his own churches, I would substitute psychology for religion and deify science. I’d lure priests and pastors into misusing boys and girls and church money.

If I were the devil, I’d take from those who have and give to those who wanted until I had killed the incentive of the ambitious.

What’ll you bet I couldn’t get whole states to promote gambling as the way to get rich?

I’d convince the young that marriage is old-fashioned, that swinging is more fun and that what you see on television is the way to be.

And thus, I could undress you in public and lure you into bed with diseases for which there are no cures.

In other words, if I were the devil, I’d just keep right on doing what he’s doing.

While these are not my own words, I can’t think of anything more succinct and prophetic than the words he wrote.  All around us we see the devil’s handiwork.  The end of everything as we know it today is coming quickly.   Don’t let anyone mislead you, for many will come in my name, claiming, ‘I am the Messiah.’ They will deceive many.  And you will hear of wars and threats of wars, but don’t panic. Yes, these things must take place, but the end won’t follow immediately.  Nation will go to war against nation, and kingdom against kingdom. There will be famines and earthquakes in many parts of the world.  (Matthew 24:4-7)  If that weren’t enough,  Then you will be arrested, persecuted, and killed. You will be hated all over the world because you are my followers.  And many will turn away from me and betray and hate each other.  And many false prophets will appear and will deceive many people.  Sin will be rampant everywhere, and the love of many will grow cold. (Matthew 24:8-12)
But the one who endures to the end will be saved. (Matthew 24:13)  If we focus on Him, the world around us won’t matter.  For the Lord himself will come down from heaven with a commanding shout, with the voice of the archangel, and with the trumpet call of God. First, the Christians who have died will rise from their graves.  Then, together with them, we who are still alive and remain on the earth will be caught up in the clouds to meet the Lord in the air. Then we will be with the Lord forever. (I Thessalonians 4:16-17)
And that’s the rest of the story!