When I think back at all the foolish, and even dangerous things I have done in the past I have to question my common sense (or sometimes my sanity).  Then there are the politically correct things that I violated time and time again without thinking. 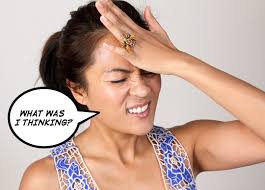 One time while playing in the neighbor’s field, I decided to start an ant farm, so I put as many ants in my pockets as I could and brought them home to show my mother.  You can imagine how she reacted.  At an even younger age, I decided the dining room walls needed some extra color, so I rubbed butter all over one of them.  The grease stain remained there for years as a reminder of my earliest art work.  As I approached my teen years, my neighbors and I discovered the excitement of rock fights.  Unlike today’s video war games, people could actually be physically injured.  Yet that didn’t stop us.  And remember that girls had “cooties” and people with glasses were known as “four-eyes.”  Later, when I became an adult coach, we were just leaving a competition,  when one of my runners decided to drop his shorts and flash his backside at the other team’s bus.  I gave him a choice, to get thrown off the team or submit to one of the killer hill workouts designed by his teammates.  We ran him the next day until he literally cried.  Can you imagine the lawsuits that would be filed against me today.  Yet, we never had another incident like that.  His parents were in agreement with what happened.  And the young man remains a friend to this day.  And, if you can imagine, my wife and I always hosted a sleep-over for the boys’ and girls’ teams at the end of the season.  I wouldn’t dare try that today.  Different times, different perceptions.
Yet even as a successful coach, I always believed that God, family, character and education always came before sports.  I tried to portray that in my life and in my relationship with each of my runners–male and female.  At the end of one our of the state championship seasons, the teams presented me with a sweatshirt that said, “Test Your Faith Daily.”  As a math teacher, I tried to help my students avoid the “weapons of math destruction.”  And not to be so open-minded that their brains would fall out.  Because it was important to learn that everything is black and white.  There are no “fifty shades of grey.”  Sin is sin and one sin is not more sinful than another.  And it is sin that separates us from God.  It’s your sins that have cut you off from God. Because of your sins, he has turned away and will not listen anymore.  (Isaiah 59:2)
Modern man attempts to explain away belief in God and His redemptive hand.  Some even use logic to conclude that on the off-chance that God exists, isn’t it best to live a good life?  That way if He does exist, they will be covered.  Even in the Book of Acts, as the followers of Christ were having more and more of an impact,  a Pharisee named Gamaliel said to the religious leaders,  So in the present case, I say to you, stay away from these men and let them alone, for if this plan or action is of men, it will be overthrown;  but if it is of God, you will not be able to overthrow them; or else you may even be found fighting against God.” (Acts 5:38-39)  Church tradition says that Gamaliel became a follower of Christ, so he knew what he was talking about–even if the others didn’t.
Remember that all knowledge comes from God. For the LORD grants wisdom! From his mouth come knowledge and understanding.(Proverbs 2:6)  And, if you want to live the kind of life God wants for you, you simply have to confess with your mouth that Jesus is Lord and believe in your heart that God raised him from the dead, you will be saved. (Romans 10:9)

But what about those sins “that so often beset us?”  Especially those that we have the hardest time with?  I am convinced that nothing can ever separate us from God’s love.  Neither death nor life, neither angels nor demons, neither our fears for today nor our worries about tomorrow—not even the powers of hell can separate us from God’s love.  No power in the sky above or in the earth below—indeed, nothing in all creation will ever be able to separate us from the love of God that is revealed in Christ Jesus our Lord. (Romans 8:38-39)
Decide to follow Him always.  What have you got to lose?

One thought on “What was I thinking?!?”