Does it ever seem to you that the world is full of things that simply make you scratch your head and wonder what on earth people are thinking? 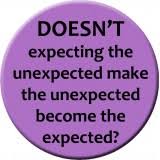 For example, where but in America…
♦   can a pizza get to your house faster than an ambulance.
♦   are there handicap parking places in front of a skating rink.
♦   do drugstores make the sick walk all the way to the back of the store to get their prescriptions, while healthy people can buy cigarettes at the front.
♦   do people order double cheeseburgers, large fries, and a diet coke.
♦   do banks leave both doors open and then chain the pens to the counters.
♦   do we leave cars worth thousands of dollars in the driveway and put our useless junk in the garage.
♦   do we use answering machines to screen calls and then have call waiting so we won’t miss
a call from someone we didn’t want to talk to in the first place.
♦   do we buy hot dogs in packages of ten and buns in packages of eight.
♦   do they have drive-up ATM machines with Braille lettering.
While nothing on this incomplete list is worth losing any sleep over, think about just a few of the Biblical stories that no man can explain and leaves all unbelievers saying, “Huh?”  Here are some in no particular order:
♥    Rain falling for 40 days and 40 nights in Noah’s time, when it had never rained before.
♥   The ten plagues that God inflicted on Egypt when it wouldn’t free the Israelites.
♥   The parting of the Red Sea, which finally allowed the Israelites to escape from the Egyptians.
♥   God speaking to Moses from a burning bush that was not consumed by the fire.
♥   Shadrach, Meshach, and Abednego surviving being thrown into a fiery furnace because they wouldn’t bow down and worship Nebuchadnezzar’s golden statue.
♥   Daniel surviving being tossed into a den of lions because he continued to pray and worship God when King Darius made a decree that no one should worship any other god beside the king for a 30-day period.
♥   The youthful  David killing the giant, Goliath, with just a sling-shot and some pebbles.
♥   Elijah calling fire down from heaven to consume a completely water-soaked offering to challenge the prophets of Baal.
There are many more, but let’s skip to the New Testament where we find..
♠Jesus’s birth to the virgin, Mary.
♠Jesus turning water into wine at a wedding feast in Cana.
♠Jesus raising Lazarus from the grave (where he had already begun to decay!).
♠Jesus walking on water.
♠Jesus giving sight to a man blind since birth.
♠Jesus feeding 5000 people with 5 loaves of bread and 2 fishes.
♠Handkerchiefs and aprons that Paul had touched were taken to the sick and their illnesses were healed.
♠Peter raising Tabitha from the dead.
Again, I could go on and on, but how many impossible things do we have to see or hear before we realize that God truly controls everything, and that everything He does or allows is for our own good.  For I know the plans I have for you,” says the LORD. “They are plans for good and not for disaster, to give you a future and a hope (Jeremiah 29:11).

Jesus also did many other things. If they were all written down, I suppose the whole world could not contain the books that would be written (John 21:25).  But if they were, I’d want to read them all.