Just after the Ark was returned to them and the Israelites were led by Samuel to get rid of their idols and rededicate their lives at Mizpah, the Philistines gathered to do battle with them.  The people of Israel were terrified.  Samuel sacrificed and interceded for them with God.   While Samuel was sacrificing the burnt offering, the Philistines drew near to engage Israel in battle. But that day the LORD thundered with loud thunder against the Philistines and threw them into such a panic that they were routed before the Israelites.(I Sam. 7:10).  That must have been quite the thunderstorm! 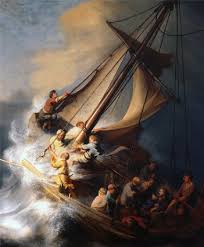 How many times do we read of the storms of life and think of them as being the trials and tribulations that we face?  I have a young relative who has been facing a series of difficult circumstances through no fault of his own.  He has no support or working relationship with his mother or father, he was asked to leave the college of his choice, he lost his means of transportation and he has been forced to move in with the parents of a friend.  To me, that qualifies as a storm.

So what about these storms–both the literal and the figurative.  In the New Testament we have this story:  35 That day when evening came, he said to his disciples, “Let us go over to the other side.” 36 Leaving the crowd behind, they took him along, just as he was, in the boat. There were also other boats with him. 37 A furious squall came up, and the waves broke over the boat, so that it was nearly swamped. 38 Jesus was in the stern, sleeping on a cushion. The disciples woke him and said to him, “Teacher, don’t you care if we drown?”  39 He got up, rebuked the wind and said to the waves, “Quiet! Be still!” Then the wind died down and it was completely calm.  40 He said to his disciples, “Why are you so afraid?  Do you still have no faith?”  41 They were terrified and asked each other, “Who is this? Even the wind and the waves obey him. (Mark 4:35-41)

And if you want to consider the storms of God, how about the one that lasted for forty days and forty nights!  things simply don’t get much more stormy than that.  So why does God send or allow the storms?  The thing to remember  is that all storms–including the Flood are not only episodes of judgment, but are also times of God’s grace and salvation.

But I have prayed for you, Simon, that your faith may not fail. And when you have turned back, strengthen your brothers.” (Luke 22:32) Think of when Jesus prayed this.  He knew that Simon would deny him.  Yet He also knew that eventually Simon would turn back to Him and become a leader and strengthener of the disciples.  We know that Simon felt that storm of regret and failure before turning back.  But the important thing was that he did turn back.  That’s all Jesus is waiting for us to do, too.  Turn back from each weaknesses and failure and return to Him.  The Bible doesn’t say he who was saved on January 23rd, 1969 shall be saved, but it does say, he who endures to the end will be saved. (Matthew 24:13) It’s an on-going and continual process.

2 thoughts on “Prayin’ Up a Storm”