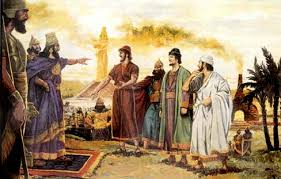 What a story!  At Daniel’s request, Shadrach, Meshach and Abednego were appointed by King Nebuchadnezzar to be administrators over the province of Babylon.  This great honor soon became a potential stumbling block as the King made an image of gold that was ninety feet high and nine feet wide.  Even worse, he then made a proclamation that whenever they heard the sound of many instruments, they were to fall down and worship the image.  Failure to do so, was to result in being thrown into a blazing furnace.  It’s not surprising that our trio of Hebrews were soon denounced by some Chaldeans for not falling down and worshipping the image when the music played.  This, of course, infuriated the King.  After all, these young men had been given great responsibility by the King himself.

Here’s where I became absolutely amazed.  Since these were devout followers of the one true God, I was not surprised when they said, O, Nebuchadnezzar, we do not need to defend ourselves before you in this matter.  If we are thrown into the blazing furnace, the God we serve is able to save us from it, and he will rescue us from your hand, O King. (Dan. 3:16-17)  But what they said next is what really floored me.  But even if He does not, we want you to know, O king, that we will not serve your god or worship the image of gold you have set up. (Dan 3:18)

Imagine the amount of faith that took to say and believe that.  They trusted God to save them.  But even if he didn’t,  they would continue to serve him.  Their faith was not dependent on their circumstance.  Their proclamation to the king  caused him to have the furnace heated seven times hotter than usual–so hot that the soldiers chosen to throw them into the furnace were burned up.  Nebuchadnezzar himself was the first to notice something rather strange and remarkable.  Instead of the three bound men that were thrown into the furnace, he saw four men walking around unbound and unharmed.  And one looked to him like a son of the gods.  Isn’t it amazing that when God solves our most difficult needs, even the outside world can see the results?

The king then commanded the young men to come out of the furnace.  When they did, everyone saw that the fire had not harmed their bodies, not singed their hair and there was no smell of fire on them.  Even the king recognized the hand of God and praised Him and made a decree forbidding anyone from saying anything against the God of Shadrach, Meshach, and Abednego.  The king then promoted the trio as well.

I’m sure each of us has situations in our lives where we feel it’s time to face the music of trials and temptations  What we do when that music starts to play is determined by our working faith in the one true God.  If our faith is limited to what we receive in a Sunday morning worship service, then our daily working faith may not be strong enough to respond the way God wants us to.  Like anything else in our lives, if we want to become good at something, it requires lots of practice and often some sacrifice.  Shadrach, Meshach and Abednego did not suddenly develop the faith to stand up to the King’s edict to worship the image.  It was honed by daily following a lifestyle that kept their relationship with God strong and alive.

So test your faith daily, so that when it’s time for you to face the music, you can respond with faith that God will meet your need.  And that you will continue to trust in Him even if He doesn’t.

6 thoughts on “Face the Music”